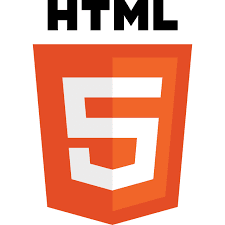 1. Introduction
2. Hello World
3. Creating a simple page with HTML
4. How to run HTML program – Notepad
5. Tags used and there meaning
How to learn Web designing with Android and ios

HTML is a markup language that defines the structure of your content. HTML consists of a series of elements, which you use to enclose, or wrap, different parts of the content to make it appear a certain way, or act a certain way. The enclosing tags can make a word or image hyperlink to somewhere else, can italicize words, can make the font bigger or smaller, and so on. HTML (stands for Hypertext Markup Language) is a computer language that makes up most web pages and online applications. A hypertext is a text that is used to reference other pieces of text, while a markup language is a series of markings that tells web servers the style and structure of a document. HTML is not considered a programming language as it can’t create dynamic functionality. Instead, with HTML, web users can create and structure sections, read more html tips and trick paragraphs, and links using elements, tags, and attributes.

How to learn Web designing with Android and ios

Here are some of the most common uses for HTML:

Web development. Developers use HTML code to design how a browser displays web page elements, such as text, hyperlinks, and media files.

Internet navigation. Users can easily navigate and insert links between related pages and websites as HTML is heavily used to embed hyperlinks.

This article will go over the basics of HTML, including how it works, its pros and cons, and how it relates to CSS and JavaScript.

At its heart, HTML is a fairly simple language made up of elements, which can be applied to pieces of text to give them different meaning in a document (Is it a paragraph? Is it a bulleted list? Is it part of a table?), structure a document into logical sections (Does it have a header? Three columns of content? A navigation menu?), and embed content such as images and videos into a page. This module will introduce the first two of these and introduce fundamental concepts and syntax you need to know to understand HTML. u may like how to create we site

How to learn Web designing with Android and ios👇👇

HTML was created by Sir Tim Berners-Lee in late 1991 but was not released officially, published in 1995 as HTML 2.0. HTML 4.01 was published in late 1999 and was a major version of HTML. HTML is a very evolving markup language and has evolved with various versions updating. check out cool thins you can do with jus html

content. Markup means that with HTML you declare what is presented to a viewer, not how it is presented. Visual

representations are defined by Cascading Style Sheets (CSS) and realized by browsers. Still existing elements that

allow for such, like e.g. font, “are entirely obsolete, and must not be used by authors”.

HTML is sometimes called a programming language but it has no logic, so is a markup language. HTML tags

provide semantic meaning and machine-readability to the content in the page.

element’s name surrounded by angle brackets, and the content in between:

There are some HTML elements that don’t have a closing tag or any contents. These are called void elements. Void

Element names can be thought of as descriptive keywords for the content they contain, such as video, audio,

A HTML page may consist of potentially hundreds of elements which are then read by a web browser, interpreted

and rendered into human readable or audible content on the screen.

For this document it is important to note the difference between elements and tags:

Let’s break down a tag…

Elements commonly have an opening tag and a closing tag. The opening tag contains the element’s name in angle

brackets (<p>). The closing tag is identical to the opening tag with the addition of a forward slash (/) between the

Content can then go between these two tags: <p>This is a simple paragraph.</p>.

Creating a simple page with HTML

HTML files can be created using any text editor. The files must be saved with a .html or .htm extension in order check this post website design guidelines and tips

to be recognized as HTML files.

Once created, this file can be opened in any web browser.

<p>This is a simple paragraph.</p>

How to learn Web designing with Android and ios👇

How to run HTML program – Notepad,

If you are wondering or having trouble while running HTML program in your Browser then you are at the Right Place. Because in this tutorial we will know how to Run HTML program using popular texts editors like Notepad, Notepad++ and Sublime 3 text editors. 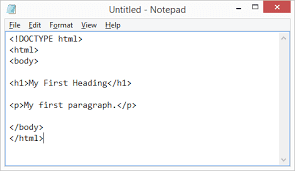 Text Editors like Notepad (not notepad++) does not come with an option where you can run your HTML program directly using Notepad. To run the HTML program you will need to follow these steps: Step 1: Save HTML File (with .html extension Example : myfile.html).

Tags used and there meaning

These are the tags used in the example:

Defines the HTML version used in the document. In this case it is HTML5.

Opens the page. No markup should come after the closing tag (</html>). The lang attribute declares

the primary language of the page using the ISO language codes (en for English).

Opens the head section, which does not appear in the main browser window but mainly contains

information about the HTML document, called metadata. It can also contain imports from external

stylesheets and scripts. The closing tag is </head>.

Gives the browser some metadata about the document. The charset attribute declares the character

encoding. Modern HTML documents should always use UTF-8, even though it is not a requirement. In

HTML, the <meta> tag does not require a closing tag.

The title of the page. Text written between this opening and the closing tag (</title>) will be

displayed on the tab of the page or in the title bar of the browser.

Opens the part of the document displayed to users, i.e. all the visible or audible content of a page. No

content should be added after the closing tag </body>

A level 1 heading for the page.